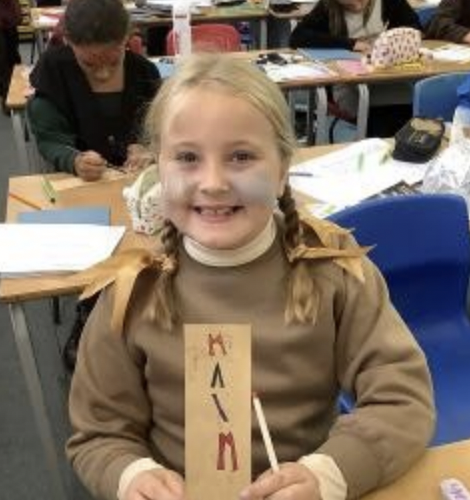 This half term Carden found itself invaded by fearsome Anglo-Saxon and Viking warriors
for Year 5’s Anglo-Saxon day.

We had great fun dressing up and there were some fantastic costumes. In the morning
we learnt about the story of Beowulf and were very enthusiastic acting out some of the
scenes. Can you spot our Beowulf’s attempts to pull off the fearsome monster Grendel’s
arm? We also looked at some Anglo-Saxon artifacts and reasoned about what they
might be. Though we guessed most of them correctly, like a comb made of bone, we
were very shocked to find out one was actually an ancient ear wax remover!

In the afternoon we continued learning about the story of Beowulf and all the different
versions. We also learned how to write our names in runes and made some fantastic
bookmarks.

We had a really fantastic day and it really inspired us to learn more about the AngloSaxons!

A nursery and primary school for children aged 3 to 10 in Hollingbury, Brighton.

Together we aspire, learn, achieve and thrive.